That’s the seat currently occupied by Senator Joe Manchin, a Democrat who has sometimes supported Justice and sometimes fussed with him.

Justice said he still needs to think seriously and consult with his family, but his phrasing today was the strongest yet to indicate he’s considering a run.

“Absolutely, without any question, I’m really thinking very hard about it. I’m very seriously considering running for Senate. I have not made a final decision yet,” Justice said in response to a question by reporter Charles Young of West Virginia News. “But I promise you irregardless to whatever I do, I’ll be your governor the next two years.”

Justice, a Republican, is term-limited after his second term as governor concludes. When he has been asked in recent weeks about continuing political participation, he has acknowledged consideration. But he went a little farther today.

“I truly believe the people of West Virginia will be right with me with whatever decision I make,” Justice said today. “That being said, a lot of thinking and planning and discussion ongoing with my family and lots of folks. But serious, serious consideration. You’ll know real soon.”

Justice, owner of The Greenbrier Resort and a sprawling network of coal companies, won a race for governor in 2016 as a Democrat with the support of Manchin and his longtime allies. 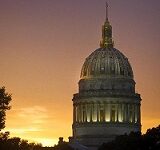